Today marks India's 59th year of Independence. I am extremely proud to be a citizen of this grand country.
I remember celebrating by hoisting the Indian Flag as a kid in school and at the play-ground near our home where we would all assemble and sing the national anthem. In Singapore however, my friends and I would head to the Indian embassy to partake in the celebration there and also the hot, yummy breakfast they served.

This year however, our celebration will be limited to the paal payasam I made and the numerous Sun TV programmes of which I've been catching glimpses on and off - as time permits. Today was just an excuse to satisfy my craving for paal payasam. Infact the desire to have it was pretty intense a month ago that I called my father to get his special method/recipe. I consider him the master of paal payasam and I still remember that in many family get-togethers he was requested to prepare this payasam. He surprised me with his answer stating that my mother is now the reigning queen of paal payasam - apparently her recent attempt was a grand success. So, she gave me her method and I've been waiting to make it ever since. It finally materialized today.

Infact I wanted to make payasam the day she landed here - last September, but it was a fiasco. I saw a recipe on the web that said that I could add everything to the pressure-cooker, but when I tried there was milk all over the kitchen when the first whistle came... I rushed to remove the cooker off the stove after which we had to clean the stove, countertops, floors and even the walls!! Thanks to this, we were late to receive my mother and she called from the airport wondering where we were.. poor thing! After that I salvaged the payasam somehow - but it didn't taste that great.

This time, I think it's different or atleast hope so. I simmered the milk for a really long time and it tastes good - albeit very sweet... here are some photos and the recipe.

1. Heat the milk in a heavy bottomed pan and once it boils, stir continuously and allow it to thicken. Medium flame worked for me. Though you have to stir constantly initially, after it reduces a bit, you can let go and stir every few mins or so. 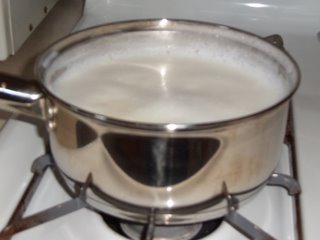 2. Meanwhile, saute the basmati rice in little amount of ghee until fragrant and pulse in a mixie to break it. Sieve it, if it's very powdery and use only the pieces and discard the fine powder.

3. Now there are 2 options. One is to cook the rice directly in the reducing milk, the other option is to pressure cook it with milk. I went with option one.

4. Once the milk reduces to about one-third and the rice is cooked, add sugar and elaichi powder, stir. Also add the saffron strands soaked in some warm milk.

5. In ghee, roast cashews and raisins and add to the payasam. Ready to enjoy! 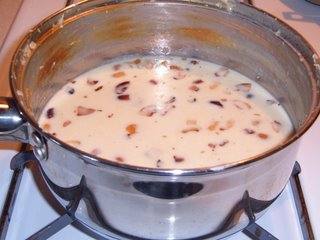 Have a sweet day!
Oh by the way, i noticed this (corny) co-incidence, today is the 15th of August and it's also my 15th post in this blog.