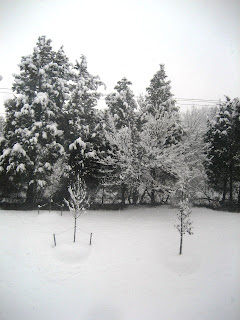 We had quite a bit of snow last Thursday and obviously I wanted something hot and comforting to sip on while I watched the huge flakes fall. I love watching the snow fall and how everything looks when covered with snow.. it makes everything seem magical, pure and clean. I had about half a can of black beans leftover after making Quesadillas so decided on a soup recipe that used them up. It was quick and easy and while the soup simmered I did some shoveling so I could get my car out later. It was so good to slurp this spicy soup and I'm sure to make this quite often. This made 3 bowls of soup so go ahead and double it if you want more. 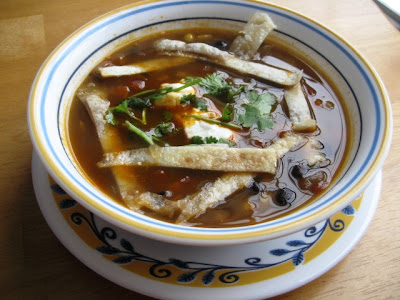 Method:
1) Heat the oil and saute the garlic and onion for a few minutes before adding carrots. After a few minutes, add the chopped tomatoes and corn.

2) Add cumin powder and chilli powder and a little bit of salt (not too much). Add in the half can of black beans and the vegetable stock. Add about a cup of water or so to reach desired consistency. Once it comes to a boil, cover and let simmer for about 20-30 minutes.

3) Wanting something crunchy to top the soup, I thought of making some baked tortilla chips but decided on a even quicker method and it worked out great. I cut half of a small flour tortilla into 1/2 inch strips and sprayed them with some oil and microwaved for about 30 -45 seconds. Watch closely because it takes just a second for them to get charred. Let it stand out for a few minutes and it will get nice and crisp.

4) I found the soup spicy enough and so didn't add any black pepper. Season it to taste and ladle into a soup bowl. Top with sour cream (if desired), cilantro and finally the tortilla strips. Very satisfying indeed. 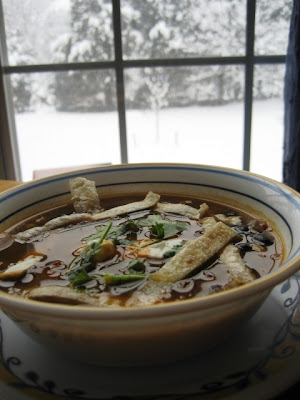 I would like to send this as my entry to Susan's Legume Love Affair event.