I know that there are so many posts for this popular dish but I couldn't resist posting my version as well. It is well-loved at home and I think it's pretty healthy too... inspite of the paneer I have made this with collard greens as well and it still tasted good. 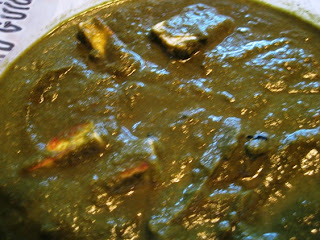 1. Steam cook the spinach until wilted (if i'm really short on time I pressure cook it for 1 whistle). Allow it to cool a bit.

2. Heat a teaspoon of oil, sprinkle little salt and arrange cubes of paneer as a single layer. Toss and let both sides brown lightly. Remove Paneer when done and keep aside. 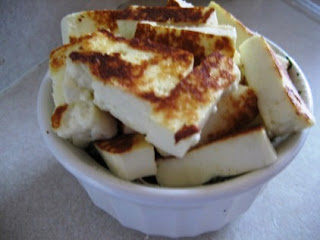 3. Heat another tsp of oil and saute garlic, sliced onions and tomatoes with little salt until soft. Allow this to cool as well and grind with the cooked spinach to a fine paste.

4. Heat the final tsp of oil and add cumin seeds, slit chillies, coriander and chilli powders and fry for just a second before adding the ground spinach paste with little water, if too thick. Season with salt and garam masala and allow it to boil. Keep covered or it will splatter all over.

5. After 5 minutes add the paneer pieces and cover again for another 5 to 10 minutes before switching off the stove. 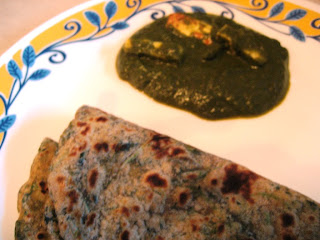 We had this with Methi Paratha for dinner the other day.

I would like to send this for Richa's Punjabi Cuisine for this month's RCI which was originally thought of by Lakshmi . Thank you for the great idea Lakshmi and Thank you for hosting it Richa.
Labels: Gravies Paneer Spinach