This may not be a great looking dessert but it's definitely a simple and comforting one and a great way to use leftover, dried up, hard, stale bread (which is what I had after making some paninis) . The cinnamon and vanilla flavours with the not overly sweet milk mixture combines to form a yummy dessert and biting into the raisins is such a sweet surprise 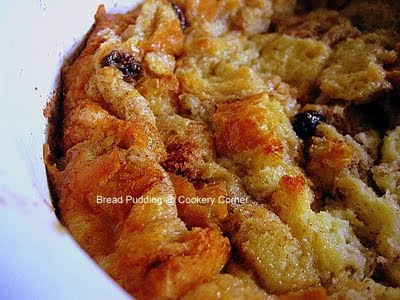 2) Grease an oven proof (about 2.5 quart) casserole dish with half tbsp of melted butter and put the bread-raisin mixture in.

3) Heat the milk in a saucepan (shouldn't boil). Whisk together eggs, sugar & vanilla. Then add milk and whisk again. Pour this gradually over the bread mixture.

4) Slightly push down the bread on the top to dunk it slightly in the milk mixture.

5) Bake in a preheated 375F oven for about 30 minutes or until a knife inserted comes out clean.


Serve warm with a scoop of vanilla icecream and it also tastes good eaten cold by itself.
Labels: Bread Desserts Milk