We returned last week from our trip to India and are settling back into our routine here. We had a wonderful time though it went by much too fast for our liking. The kids in particular had an awesome time with grandparents, relatives, cousins, old friends & some new friends that they made.  They loved the auto rides, playing in the water, visiting temples where my son would point to all the idols and go "ummaachi" (for God) ...running around in the garden, swinging, watching fish in the pond, visiting the beach, enjoying fireworks and so on...  Food-wise, I made it a point to enjoy lots of mangoes and had so many tender coconuts (ilaneer) as well.... the only thing I missed having was nongu since i had missed the season... but got a chance to taste navapazham after ages. Now, we miss everyone and the fun times but that is life...  Here are some snapshots of the vacation. 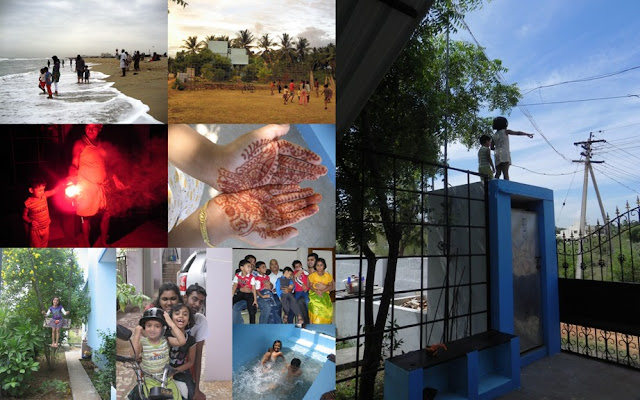 Coming to the food part of this post, I wanted to post  a picture of the airplane cake I made for my son's birthday (it's a good thing you know what it is because otherwise it would be hard to recognize it as an airplane :) ).. I had plans of making a decent looking airplane cake since that's what he wanted for turning three (on August 5th) but for some reason the cake stuck to the pan and I could only salvage a very small part of the cake without it breaking apart, so I tried to cut and shape that into an airplane... However, Nikhil looked past all that (being as young as he is) and was quite happy with the cake. I tried my hand at making a Swiss Meringue Buttercream for the first time and really liked how it turned out but can't say i love how it tastes... was much too buttery for me. I think i still prefer my usual whipped cream frosting taste-wise. 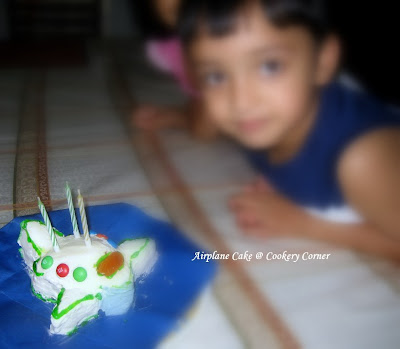 Also, here's a picture of a weekday dinner that one can put together rather quickly... I made Falafels (using this recipe) but instead of deep frying them I baked them (which is what I've been doing the last several times I've made these) at 375F for about 20 to 25 minutes (flipping once in between) and then shallow frying them on a tawa with just a few tsp of oil.  I then cut veggies up (while the falafels were baking)  - ribboned carrots (carrots that are peeled all the way to get thin ribbons), cucumbers, tomatoes, red bell peppers and for the onions to remove the pungency, I soaked the sliced onions in a mixture of 1tsp vinegar, half tsp sugar, 1/4 tsp salt and some water for about 30 minutes. I also made an avocado-yogurt dressing (recipe below) and rolled everything up in whole wheat tortillas (Pitas would be great but didn't have any) for a super tasty wrap.For a low-carb option, ditch the tortillas/pitas and just toss the veggies and cut up pieces of falafel into a salad with the dressing - yummy. 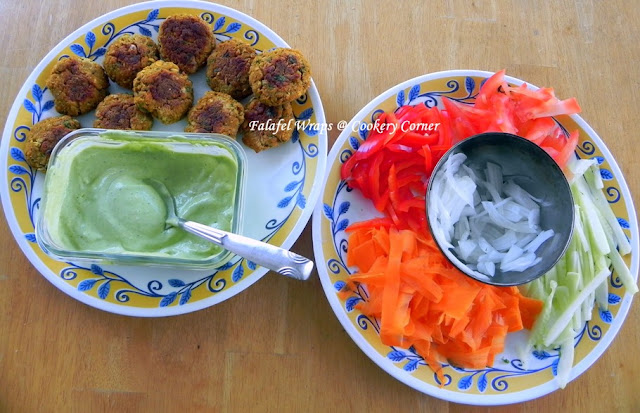 AVOCADO YOGURT DRESSING - about 1 cup
(Great for wraps or salads)

Method:
Combine all of the above in a blender/mixie till smooth.
Use as a dip, salad dressing or when making wraps. You don't taste the avocado in this so it's great for those who are not fans of this buttery fruit.
Labels: Avocado Cakes Channa Tiffin Tip Yogurt