Remember how I dreamt of a pizza when I laid eyes on  some tomato basil feta cheese... well, here is that dream becoming a reality... This is my take on a greek style pizza which is inspired by the Garlic Spinacci pizza we get at Vocellis (a pizza joint) which I really like... I added a few extra ingredients into the mix and some spiciness to add a kick. I must say that this was quite a hit with the entire family and it was an enjoyable dinner for sure... Definitely something I'm going to be making often. 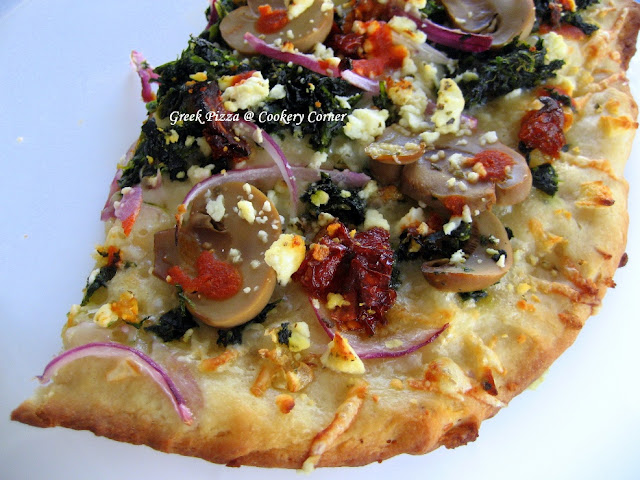 
Pizza crust - recipe here (I used half to make one pizza & added some red chilli flakes and oregano with the dough) or use store bought.

1) In a saucepan, heat half tbsp olive oil, add the thinly sliced garlic and saute till golden brown. Remove with a spoon and chop that up.  In the same pan, heat the remaining oil and saute the spinach with a tiny bit of salt and pepper (do not oversalt since the feta cheese is quite salty already). Preheat oven to 425F

2)Spread pizza into thin  layer (or to desired thickness, thin is how we like it) I used a 12x10 inch rectangular pan lined with foil - but you can vary the thickness to your liking.

3) First spread the mayo/garlic cream sauce evenly on the base. Sprinkle red chilli flakes if using (sometimes I stir in some when making the dough).

4) Sprinkle the swiss /mozarella/pepperjack cheese in a thin, even layer (I used swiss), then sprinkle the chopped garlic, cooked spinach, followed by red onion slices, mushrooms, sun dried tomatoes and olives (if using) in an even layer all over the pizza.

5) Then add the crumbled feta cheese all over the pizza and dot with sriracha (which is my favorite way of adding spice to pizzas). Slowly drizzle half tbsp of olive oil over the pizza.

6) Bake in a preheated oven for about 15 minutes (depends on how thick the crust is). Remove from oven, slice and serve! 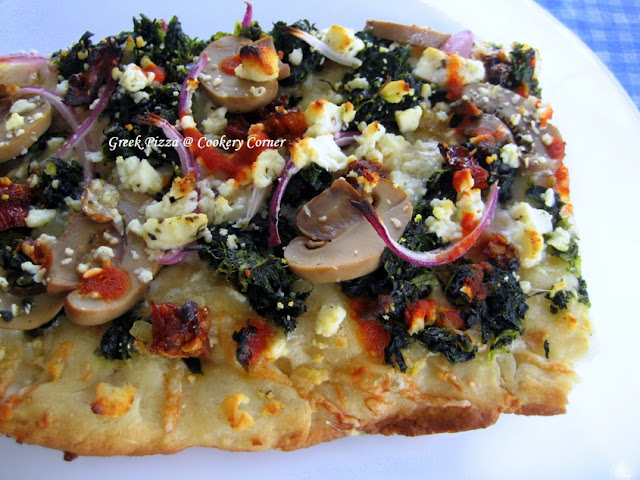