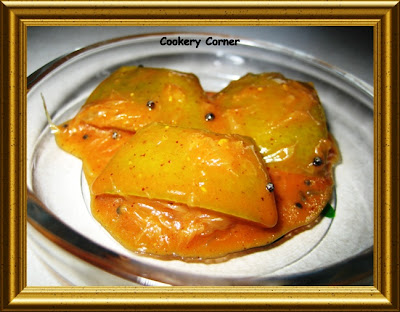 I have always been hesitant about making Pickles - always thought it was complicated. I vaguely remember my mom complaining about a few failures when it came to this - mostly with the pickle developing some fungus and she would be lamenting about having to throw it away, and what a waste it was. But of course, she didn't have much opportunity to try and perfect this because my grandmother would always make enough pickles for her ... Actually I think my mom has been rather pampered, paati would always make an extra batch of ghee for her, grind all the flours, spice powders, painstakingly make vadaams and so on, all in an effort to help her daughter - a working mother of two.

But with so many people pickling in the blogosphere, especially after Coffee announced 'Preserve It' for MBP, i decided to try it sometime. Though I missed the event, I got the opportunity with about a dozen limes on hand. First, I contemplated on the two most popular lime pickle recipes - Indira's and Manisha's version. For a while I thought I could make half a batch of both recipes like Bee did but then certain other factors played a part... For instance, Manisha's recipe called for lots of Sunshine and the end of August was not the most ideal time. Actually we had quite a bit of sun till then but around the time the pickle idea was forming in my mind, overcast, gray skies became the norm with much cooler temperatures. Also, the recipe required about 20 green chillies and that was another issue - didn't have enough on hand. Considering these two factors, I decided I will just handle one at a time and picked Indira's lime pickle recipe.

On Friday evening, I cut the limes, added 3/4 cup of lime juice and the required amount of salt. Settling on the correct sized bottle was a bit of a problem. Then I found one big enough... and i religiously gave the limes a toss everyday... something I remembered noticing as a kid though the recipe just asks for them to be covered for 4 days.

I was looking forward to Wednesday (the 5th day) so I could add the masala powders but when Wednesday actually came, I almost forgot until I opened the cupboard for the customary 'toss'. I immediately set about toasting the tsp each of cumin, mustard and methi seeds, powdered them and added those, alongwith a pinch of turmeric and 5 tsp chilli powder to the pickle. I was paranoid about dry 'everything' - utensils, hands, mixie and so kept on wiping and re-wiping everything. More waiting now...


Day 12
Exactly a week after adding the masalas I opened the jar once again, praying fervently that they would've softened and cured by now and was hit with a wonderful aroma of pickle masala - it took me to my grandma's kitchen where she would have huge jaadis (porcelain jars) of pickle... The actual lemon pieces however looked a bit too sturdy for my liking. Though I was 90% sure that it wasn't ready, i still ventured to get a piece out (with a dry spoon, of course) and tasted it and it tasted like the real deal albeit a tad crunchy but I didn't mind it at all - infact it reminded me of naarthangai (citron) pickle. It was mild, yet flavorful and within seconds i ate the whole thing but decided to let this rest another week and try my luck again.
Day 19

I couldn't wait much more. So, I checked the texture quickly and though it hadn't softened completely it was almost there so I heated 4 tsp of gingelly oil (Nallennai), sprinkled some asafoetida powder and 1 tsp of mustard seeds. They spluttered immediately after which I let this oil cool slightly before adding it to the pickle and mixing well. My tangy, tasty, spicy, super pickle was ready! Thanks Indira. 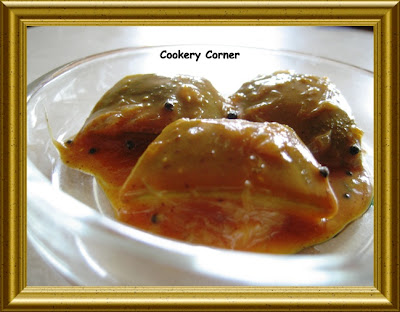 I would like to send this as my entry to Waiter! There's something in my... savoury preserve!
Thank you Bee for letting me know about this event.
Labels: Jams Pickles Spice-Powders Lemon Other Blogs