Our little boy turned four on August 5th and has been looking forward to his birthday for a while now...  He wanted balloons and lots and lots of cars and has been asking me for a train cake. Infact last year too he mentioned a train cake but at the last minute (thanks to our trip to India) he got fascinated with airplanes and wanted an Airplane cake instead.

Ever since we watched the video of how to go about creating a train cake, he would ask me several times a day if the train cake was ready and was super excited when we *finally* made it over the last weekend. He and my daughter helped decorate the cake and piled on the candies. He had such a happy, proud face when we took the cake to his daycare to celebrate with his friends... the other kids at daycare too loved the cake so I can attest to this cake being a big hit with kids of various age groups.

The cake was quite easy to put together...and doesn't require major carving or anything too intricate. It also wasn't too time consuming - you would have to start a day or two earlier only because it helps ensure that the cakes are cooled and refrigerated and allows time between the crumb coat and the actual coat... but the actual frosting is pretty easy. My only complaint would be the fact that i had quite a bit of clean-up to do after but after seeing how much everybody liked the cake, it was definitely worth it.

I baked 2 loaf cakes the previous night (one becomes the engine and the other is cut into 4 equal parts and make the train cars -  I used only 3) and refrigerated them, wrapped in plastic wrap. The next day, I cut the engine and train cars, made my favorite whipped cream frosting using which I did a crumb coat and put them back in the refrigerator for a few hours... then pulled them out again in the afternoon and did the final coat of icing and arranged them on the tray before piping in a few other details and adding the candies/cookies 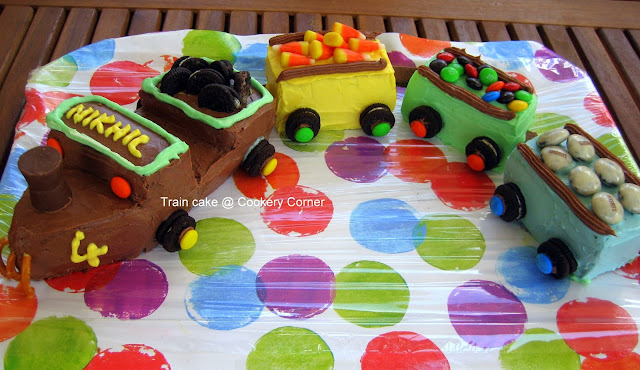 Engine - carrot cake (in a loaf pan) with chocolate cream cheese frosting (recipe below)
Train car - vanilla cake  with whipped cream frosting
Wheels - mini oreos with an m&m stuck on with some frosting
Coal on engine - oreo halves
Candies on cars - your choice (I used candy corn, m&ms and hershey's cookies and creme)
To connect the engine and train cars - kitkat bars

Method:
1) Beat cream cheese in a bowl until fluffy.
2) Melt the chocolate in a separate bowl (I microwaved them for about a min... in 30 second increments) and stir.
3) Add melted chocolate to cream cheese and beat adding in the salt and vanilla extract.
4) Add the confectioner's sugar and milk - beat until desired consistency is reached. 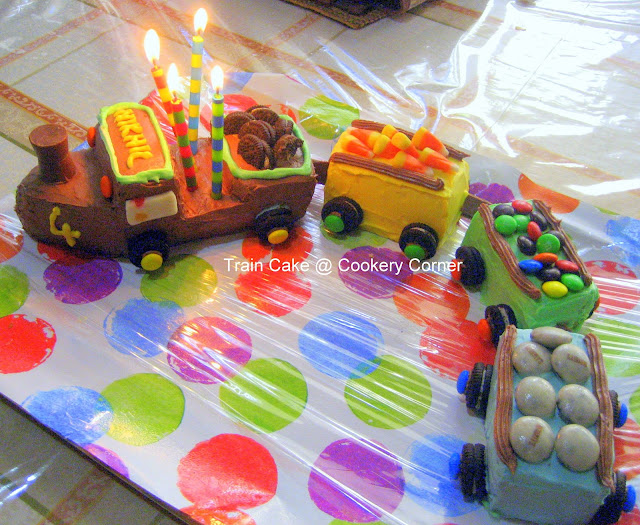 While we are on the topic of cakes for boys... I baked this (american) football cake for my friend's son since he loves the game... It uses a loaf cake again (banana cake this time) and covered it with a ganache frosting (melted chocolate and cream) and decorated with some microwaved and rolled out tootsie rolls and some nougat candy. 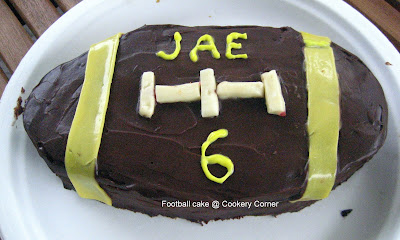