I've been absconding because work has been rather busy and there were quite a few things going on... To add on, I have a project on Queensland, Australia due on April 1st - actually, my 5 year old daughter does, but we all know who will and can browse for information, print pictures and create a huge chart for display at the school's International Festival! She is very excited about it and am sure she will help me as much as she can but it's still one more thing for me to do... We also have to figure out a way to do it while the little brother is out of the way. She also has a 'test' at her carnatic vocal class the coming weekend so every evening we've been practicing sarale varasais and getting her to perfect that and her taalam has been rather daunting. I thought all my stressful school days are over but the truth is that they are back!

Coming to this kurma recipe... I have to talk about soya chunks - i love these chewy little, protein packed fellas - always have and I can't believe that this is the first kurma recipe that i'm posting that involves them. This gravy is creamy with coconut milk and you can even add peanuts but I went with almonds instead and pressure cooked it so that made the soya chunks kind of melt in the mouth and they absorbed the flavour of the gravy beautifully. 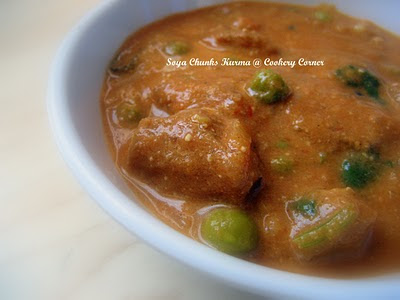 Ingredients: Soya chunks - about 25 pieces Peas - half cup or so (I used frozen) Onion - 1 medium (if big, use 3/4) - chopped Tomato paste - 1 to 2 tbsp diluted in water (substitute with 1 pureed tomato) Coconut milk - 1/3 cup (you can also use coconut milk powder mixed with warm water) Salt - to taste Garam masala - 1/4 tsp Coriander leaves - for garnish Oil - 3 tsp (divided) To Fry & Grind: Garlic - 5 cloves Ginger - 1 inch piece Green Chillies - 5 to 6 Poppy seeds - 1 tsp Almonds / Cashews - 12 Coriander seeds - 2 tsp Cumin seeds - 1 tsp Chilli powder - half to 1 tsp (to taste) Curry Powder / Kitchen king masala - half tsp Method: 1) Boil water in a wide mouthed bowl with a bit of salt and add the dry soya chunks (Nutrela). Switch off the stove, cover and allow to cook for 15 min. This makes them soft and they also become quite big. If too, big you can halve them after squeezing out all the water from them (once cooled). Set them aside. 2) Meanwhile, fry the ingredients to grind in a tsp of oil for a few mins. Allow to cool and grind to a fine paste with some water.

3) In a cooker, heat the remaining oil and fry the chopped onions till soft and translucent. Now add the diluted tomato paste (or tomato puree) followed by the ground paste. Fry till the paste is almost dry.

4) Add the frozen peas at this stage and salt as required, along with the well drained soya chunks & garam masala. Add sufficient water and coconut milk to form gravy of desired thickness.

5) Cover and pressure cook this for about 7 minutes or 2 whistles.

6) Once the pressure is released, transfer to a serving bowl and sprinkle coriander leaves as a garnish. This pairs well with chapathis/rotis. Note: This can be just cooked in a pan but I think pressure cooking makes the soya chunks taste even better.