I think this is my first post with Quinoa (Keen-wah)... although I've been including it my diet... the rest of the family did not follow suit. It definitely wasn't love at first sight but since I had read that it is pretty healthy combined with the fact that it has a fair bit of protein, I gave it another try when my mom made ven pongal with it, substituting quinoa for rice  and loved it... my parents also liked it though my husband refused to even give it a try. Later I found this Quinoa-Mung dosai recipe and that was something that the whole family (husband and kids included) ate with no complaints - thanks to Usha.

One day when I had some sprouted mung beans, I decided to combine it with some quinoa for a salad since I had tasted something similar at Costco.  Added veggies and wanting some sweetness added some orange segments as well... I forced my husband to taste it but after the first bite he was hooked. I then served it with the pita chips (remember this recipe? and yes we still had some left, bags from Costco are humongous) for him and he liked the crunch from the pita chips and now he has been asking me to pack this for his lunch :) I'm glad this recipe made a convert of him.  I have made this salad several times since then and is very easy and perfect for hot summer days (when you don't want to be in the kitchen) since there's very minimal cooking involved and it's easy to change up the veggies and fruit so you can have a tasty variation each time. Makes a great dish for packed lunches or picnics too.

1) Heat a small deep pan on medium, add quinoa and water in the ratio 1:2 (so 2/3 cup in this case), add a tsp of butter and a few pinches of salt (better to undersalt at this stage). Once the water starts to boil, reduce flame to a simmer, cover with a lid and allow to cook until dry (about 10 to 15 mins). Once done, stir gently and keep aside. The key is not overcook quinoa so it has a slight crunch and that gives the salad great texture.


2) Since the green beans were soaked, they needed only a few minutes in the microwave. Add beans, a bit of salt and a tbsp of water and cook for about 5 to 6 minutes until cooked but still has a bite to it. The skins may peel off but no need to discard. The water had fully evaporated for me, but if not drain it.


4) In a small bowl combine the extra virgin olive oil, lemon juice, salt, black pepper and some lemon-pepper seasoning if using (I had the Mccormick brand that i'm trying to use up) and stir this into the quinoa-mung salad.


5) Finally stir in the orange segments (I even added some of the orange juice i got when cutting into the orange). Chill this for about 15-30 minutes to allow the flavours to mingle. Tasty quinoa salad is ready. 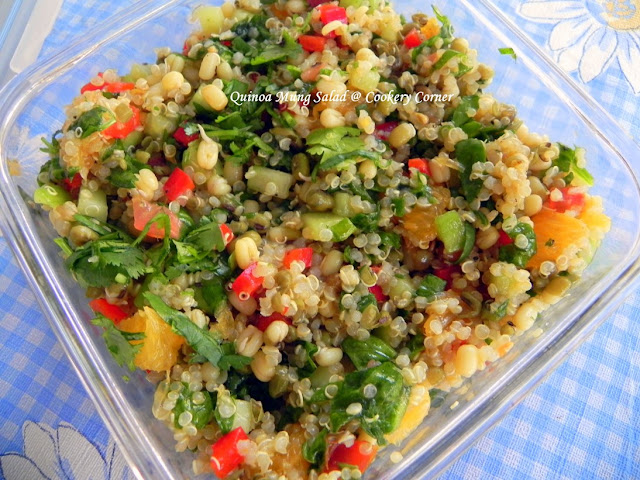